Rebecca Watts
Welcome to my little online place. Here you will find a selection of my poetry, links to new publications and details of upcoming events.
Thanks very much for stopping by; do call again.

​​​About me​
​Originally from Suffolk, I moved to Cambridge in 2001 to study English at Trinity College, and later to Oxford where I completed a Master's in 20th-century English literature. Via London and Cumbria, and jobs in publishing, administration, education and heritage, I moved back to Cambridge in 2011 and now work part-time in a library. The rest of the time I work on writing and editing projects. My poems have appeared in a range of publications, including PN Review, The North, Magma, Poetry Ireland Review, the Guardian, the Financial Times, the TLS and New Poetries VI (Carcanet, 2015). My debut collection, The Met Office Advises Caution, was published by Carcanet in 2016. In 2018 I was a Literature Finalist in the Rolex Mentor and Protégé Arts Initiative, and in 2019 I was awarded a Hawthornden Fellowship. My second collection, Red Gloves, is due out from Carcanet in 2020. 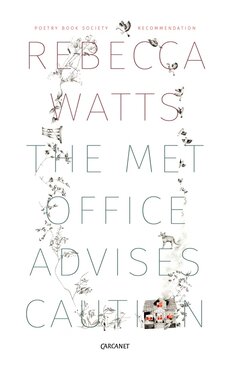 'What a joy to find a writer so capable of creating narrative within the poetic, humour within philosophy, wildness and drama within the quotidian. Watts has a rare, perceptive eye, searching intelligence and gorgeous levity. This is a striding and far from standard debut.' – Sarah Hall

'Rebecca Watts's poems adopt strange and illuminating vantage points – the bird's-eye view of a hawk, or a Victorian lady surveying a street from a penny-farthing – to do poetry's work of telling the truth, but telling it slant.' – Emma Jones